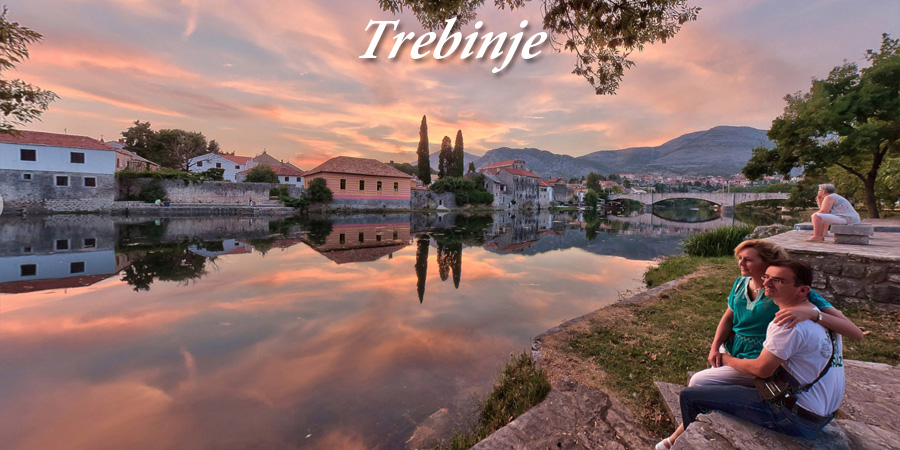 Trebinje is the most southern city of the Republic of Srpska and B&H. It is situated in the valley of the Trebišnjica River, at the borders of three countries, Bosnia and Herzegovina, Montenegro and Croatia. The altitude of the city’s urban area is about 275m. Geographical position is 42 ° 42 ‘ N and 18 ° 20 ‘ E. Trebinje is located at the important crossroad. It is 27 km away from Dubrovnik, 115 km from Mostar, 360 km from Banja Luka, 70 km from Nikšić, 120 km from Podgorica, 38 km from Herceg Novi, 230 km from Sarajevo and 480 km from Belgrade.

Today city area covers ​​an area of 904 square kilometers. According to the last estimates, Trebinje has around 32.000 inhabitants, out of which more than 75% of them live in the urban part of the city. The city territory hosts three border crossings, two with Montenegro (towards Nikšić and Herceg Novi) and one with Croatia (toward Dubrovnik).

The city area is very rich in natural resources (mild climate, water, sun, wind, medicinal herbs, etc.) which have not been fully exploited yet. Economy of the City of  Trebinje mainly relies on the electricity and partly on manufacturing sector. Preference is lately given to an intensive development of agricultural and food processing production, tourist offer and tourism entrepreneurship, since these two branches have significant comparative advantages in Trebinje, in comparison to other places and underused potentials.

Rich cultural and historical heritage, climate and favourable geographical position significantly influenced tourism to become a strategic point in the future development of Trebinje. Special attention of numerous tourists, besides the City’s centre built in the Mediterranean building style, is drawn to a specific botanical and catering complex, formed out of 160 years old plane trees.

It is a summer patio, unique in the whole area of the former Yugoslavia.

There is also a military fortress built in the early 18th century, today’s Old Town or Kastel, with its narrow lanes, arches, gates and antique stone buildings, Osman Pasha’s Mosque, the Museum of Herzegovina, numerous cafės and boutiques.

Тrebinje is divided into two parts by the Trebišnjica River, the longest sinking river in Europe. It is a river of unusual beauty and purity. On its right bank in Police, near the Perović (Arslanagić) Bridge, there is a small church with the gravestone of Trebinje’s county prefect Grd. Nobleman Grd lies under the oldest known tombstone in the entire B&H.

Some of the most known medieval monasteries are located in Trebinje and its surroundings These are: St Paul and Peter’s Monastery in Crnač i.e. Petrovo polje , Zavala Monastery located on the periphery of Popovo polje, Tvrdoš Monastery, a seat of the Eparchy of Zahumlje, Herzegovina and the Littoral. Duži Monastery (about 12 km from the city) was once the seat of the Eparchy, and in the 19th century the seat of Luka Vukalović and Mićo Ljubibratić uprising headquarter.

The  Cathedral Church of St Transfiguration of our Lord is located in the city park and in Mostaći the Church of St Clement, a significant cultural and historical monument. In the very heart of the City, there is a Catholic Cathedral, built in the early 20th century. At the end of Petrovo polje is Paul’s cave, a meeting place for religious people and a place where, according to the oral tradition, St Paul on his way to Rome preached for a while.

The Hercegovačka Gračanica, endowment of Branko Tupanjac, founder and executor of Dučić’s will, was built at the Crkvina hill. By poet’s wish his  remains were buried in this church, widely known for its beauty. In Popovo polje-Mrkonjići, near Trebinje, there is a newly built temple built on the foundations of  the birth house of St Basil of Ostrog and Tvrdoš, a saint and miracle worker.

In the settlement Gornje Police- Brankovina, is located one of the best-preserved medieval towers in Herzegovina – Branković tower, the tower of Vuk Branković’s grandfather or father. The City river banks are connected by three bridges –two stone bridges and a concrete one. The oldest bridge is Perović (Arslanagić) bridge- a piece of unusual architectural skill and beauty.

On the way to Bileća is Dobrićevo Monastery, valuable cultural monument renowned for its frescos, which are probably work of the last great Byzantine painter Georgije Mitrofanović, or some of his best students.

The tourist offer is complemented with nearby resorts: Jazina, Ubla, Lastva, Studenac, numerous restaurants with summer patios, hotels (Platani, Leotar…), motels and other accommodation capacities. An important role in the promotion of Trebinje as a tourist centre has the City’s Tourist Organization which has, through cooperation with the NGO sector, implemented a series of projects important for Trebinje’s tourism identity.

Historical retrospective of Trebinje witnesses that Trebinje has always been a cultural centre in what is today known as Eastern Herzegovina. Rich cultural heritage, numerous cultural and historical monuments, widespread cultural tradition and modern cultural tendencies are connected in the unique ambient of Trebinje, in an increasingly known Jovan Dučić’s legacy:  “Trebinje – the city of culture“.

By continuous development of all that has been left for future generations to keep and by investing in modern forms of cultural life, the City of Trebinje is today recognizable by its numerous cultural contents which witness about constant historical development of Trebinje.

From the time we called it Travunia, until today when it is called Trebinje, it can be said that the city has kept the spirit of the past. Two great empires, Ottoman and Austro-Hungarian, left eternal reminders of the periods when the city, despite turbulent historical trends and events, resisted the influences of time and transience.

Trebinje is a modern, cultural community today with numerous cultural preferences such as folk tradition, music, theater, film, literature and other modern artistic creativity. According to some researches, cultural preferences are based on the synthesis of traditional and modern cultural forms,  where the inherited cultural traditions are well respected, as well as those to

which we strive towards, through deconstruction of monocultural tradition and appreciation of multicultural heritage passed to us in the past.

In order to preserve and improve the cultural life, Trebinje is rich with numerous cultural events and ceremonies. Cultural policy of the local community, defined in recent years and embodied through various cultural events, gives Trebinje’s culture a completely new dimension. For a long time,  Trebinje has been the environment in which culture represents a spiritual need, and lately even more a momentum of tourism development. Because of that, Trebinje is marked as the city of culture.

“Trebinje – the city of culture”, formulated in the context of the European-Mediterranean cultural tradition, is a sort of Jovan Dučić’s legacy, one of the most significant Serbian poets. This project and identity of the city as a cultural and spiritual centre, is supplemented by cultural events which overcome regional and national character and become a meeting place of artists and cultural workers of wider significance. First of all, there is a traditional cultural event called Trebinje Summer Festival which for many years, from April to October, attracts artist and art lovers by its various and high quality contents.

During the last decade, Trebinje has become an economic, health, cultural, educational, sports and spiritual centre of East Herzegovina. Such picture of Trebinje, as cultural, educational and spiritual center of the region, is backed up by numerous educational institutions, schools, faculties, museums, legacies, galleries, art colonies, amateur theaters, cultural and artistic societies and many cultural events. There are three institutions of higher education in Trebinje: Academy of Fine Arts, Production and Management Faculty and College of Tourism and Hotel Management.